The 44th edition of the Dakar Rally started on the 1st of January 2022. All the registered vehicles departed from the city of Hail (Saudi Arabia), but this time was different as a very special vehicle took the start. The French company Gaussin, alongside its sponsor Aramco, manufactured a truck propelled by hydrogen as fuel, which has started and is taking part in the race: the H2 RACING TRUCK®.

Why is this vehicle so special and revolutionary? There are several reasons:

1. It is an absolute zero emissions vehicle that participates in this edition of the race, although it is not a competitor. All the other vehicles in the race run on fossil fuels, biofuels, e-fuels or are electric/fossil hybrids of different types. All of them produce local CO2 emissions in their operation and have combustion engines whereas Gaussin’s does not.

2. It is one of the few teams in history to participate in a Dakar with a vehicle that does not emit CO2 during the race and the first truck, although it participates without being in competition. The very first to do this was the Acciona 100% Ecopowered, a 100% electric car with lithium cells, of which the author of these lines is co-responsible for the electric design in its first participation in 2015. This car did compete with the rest of the vehicles, and it is still the only one that has taken part with zero emissions and being a competitor, pending Gaussin’s entry next year (let’s hope so).

4. It is opening a new era in the Dakar as it is the first of a saga. The ASO (the Dakar’s organising company) has set itself the target that all vehicles entering the rally will be hydrogen-powered by the 2030 edition.

Therefore, it deserves a special mention and it is worth dedicating these lines to a better understanding of how this technology works and how it will be applied to the field within the commercial truck industry in the future. 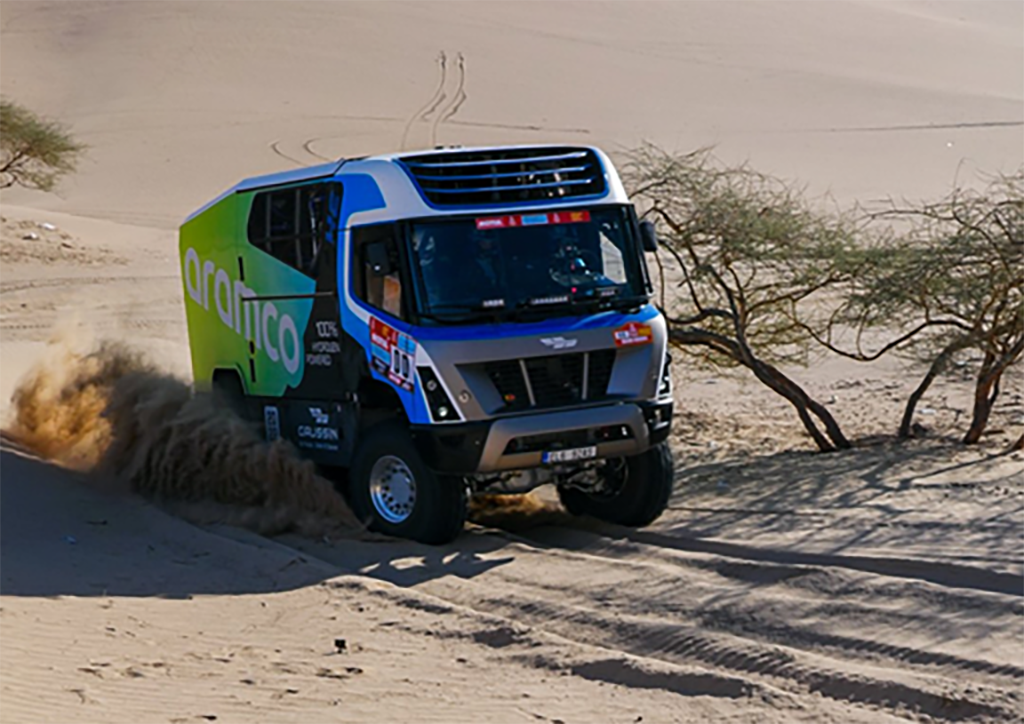 The design of a truck such as the Gaussin/Aramco truck is based on a central component, the fuel cell, which converts the chemical energy from hydrogen gas into electrical energy without any intermediate thermal process (i.e. no combustion or gas expansion). To simplify, it can be said that it directly extracts the electrons from hydrogen to generate electricity using plastic membranes in PEM technology (Polymer Electrolyte Membrane). In this specific case, the fuel cell can supply a maximum electrical output of 380 kW (4 x 95 kW cells), which means that its consumption at full power is likely to be around 25 kg of hydrogen per hour (assuming a cell efficiency of 45-50%, typical for this type of devices).

The chemical subsystem stores 80 kg of hydrogen at 350 bar pressure in 14 carbon fibre tanks. These tanks are the primary energy storage for the vehicle. The hydrogen is continuously decompressed and supplied to the fuel cell for consumption at low pressures. Given the consumption of the stack, this truck will consume all the hydrogen on board with the fuel cell running at full power in approximately 3 hours. Since the fuel cell does not always run at full power, Gaussin claims that the range of the truck is between 3 and 5 hours on the road and the driving range is 250 km. It is worth mentioning that this consumption is very high for a truck in a dune race, as the same truck is estimated to have a range of 800 km on the road, although there would be plenty of battery power left over in this scenario. On the other hand, the average speed of the vehicle may seem low (50-83 km/h), although it is very similar to combustion vehicles for a race of this type. 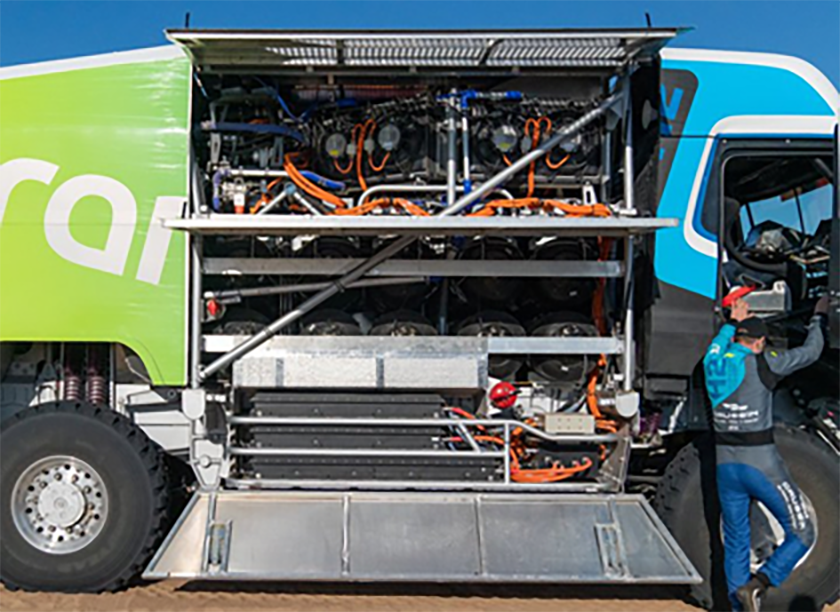 Inside view of the truck, where the fuel cells can be seen on top of it. In the middle section are the hydrogen pressure tanks. At bottom left are the batteries and at bottom right are the electric power controllers.

The electrical subsystem drives the vehicle using electricity supplied by the fuel cell to the electric engines. These engines are responsible for dictating the peak instant power available to the truck. In this case, the Gaussin/Aramco truck has two 300 kW (402 hp) electric engines placed on each truck axle, giving the truck 600 kW (804 hp) peak power. The truck is therefore equal in power to the best trucks. For example, the Kamaz (winners of 18 editions) have around 1,100 hp using an internal combustion engine and weigh 8.6 tonnes. The Gaussin H2 RACING TRUCK® weighs 12.5 tonnes and, although it is heavier than the Kamaz, it will still be among the fastest accelerating trucks on the Dakar due to the instant power delivered by its electric engines.

The engines described have almost twice as much power as the fuel cell, therefore, where does the extra power needed for them come from? The answer is from a 82 kWh lithium battery with which the truck can use its maximum power for a duration limited to 22 minutes (data calculated by the author). After this period, the truck will have to reduce its power consumption to below 380 kW in order to have enough free capacity for the fuel cell to recharge the battery and, afterwards, to be able to once again use the maximum power of the engines.

Thus, the truck has a hybrid system in which the fuel cell provides the base power and the battery provides the peak power. This is the same configuration that is found in both hydrogen cars and trucks for use in civil purposes.

The stages are up to 830 km long and within them there are some special stages* of up to 460 km. As the truck has only 250 km of range, this means that they will have to refuel with hydrogen both on the link sectors and on the special stages.

*The special stage is the timed dune or offroad section of the race, the rest of the stage is usually a road link sectors and is not timed.

The hydrogen refuelling of this truck is done with green/renewable hydrogen, which means that it has been generated by electrolysis from renewable sources and has not emitted CO2 in its production. Although Gaussin does not state it, they probably have portable hydro generators waiting for the truck every 250 km, with which they transfer pressurised hydrogen to the tanks. The vehicle will most likely refuel during the special stages at the same locations as the petrol refuelling stations on the motorbikes, as they are usually exactly every 250 km. During the link sectors, it will probably be followed by a convoy of technicians who will assist the truck, like all “top” vehicles. (This refuelling strategy is the author’s intuition based on his experience of the Dakar and the technology, Gaussin has made no statements yet). Actually, the route taken by the truck may not be the same as the one taken by the race cars, as it is not racing.

Finally, it is worth pointing out that this technology is the spearhead on which the civilian heavy-duty truck technology is being developed alongside. Hydrogen brings to the transport sector a solution for high-capacity high-mileage trucks that is difficult to achieve with purely battery-electric systems. Companies such as Hyundai, Nikola, Daimler, etc. are already testing their hydrogen truck fleets. Hopefully, these initiatives such as the one by Gaussin will serve as a test bench for the industry.

This website uses cookies to improve your experience while you navigate through the website. Out of these, the cookies that are categorized as necessary are stored on your browser as they are essential for the working of basic functionalities of the website. We also use third-party cookies that help us analyze and understand how you use this website. These cookies will be stored in your browser only with your consent. You also have the option to opt-out of these cookies. But opting out of some of these cookies may affect your browsing experience.
SAVE & ACCEPT
Scroll Up